I have played Ace Combat Zero three times - as a mercenary who eliminate every visible objects, as a soldier who always stick to the mission target, as a knight who minimize destruction and maximum the effects. As a bonus, the SP mission is unlocked now. It wasn't as tough as I thought, only have to face 5 ace squadrons out of 10 in total.

I really like the two special crafts, X-02 and ADF-01 Falken. Falken has a cyber-looking and the cockpit is enclosed. It then utilyzes cameras and monitors to formed the view rather than a glass canopy, as others do. This kind of view or display gives pilot a over 180-degree (or 360-degree) field of view, very like those in Gundam cockpit. 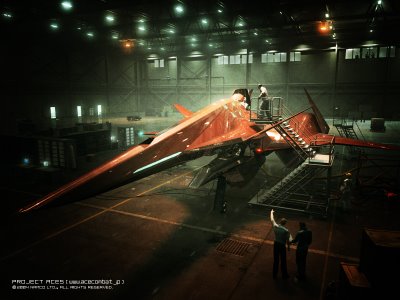 These two crafts are one of the hidden features (ref: Ace Combat Zero official web, System > Other New Features > 03) and only available to players of Ace Combat 4 and 5 (AC4, AC5). Luckily I've played AC5 before and have the save file in the same memory card. The remainings are to finish the kill list and medals, re-play missions and get S-rank and fill up the hangers with all the aircrafts.

May be the only thing left for me to do is just to capture the sound track. The music is good. May be I can buy "Ace Combat Zero: The Belkan War OST" (but not yet released)...

Or I just have unplug the console and put it (back) into the bookshelf. And then, this is the end of story.

"Yo buddy, you still alive?"